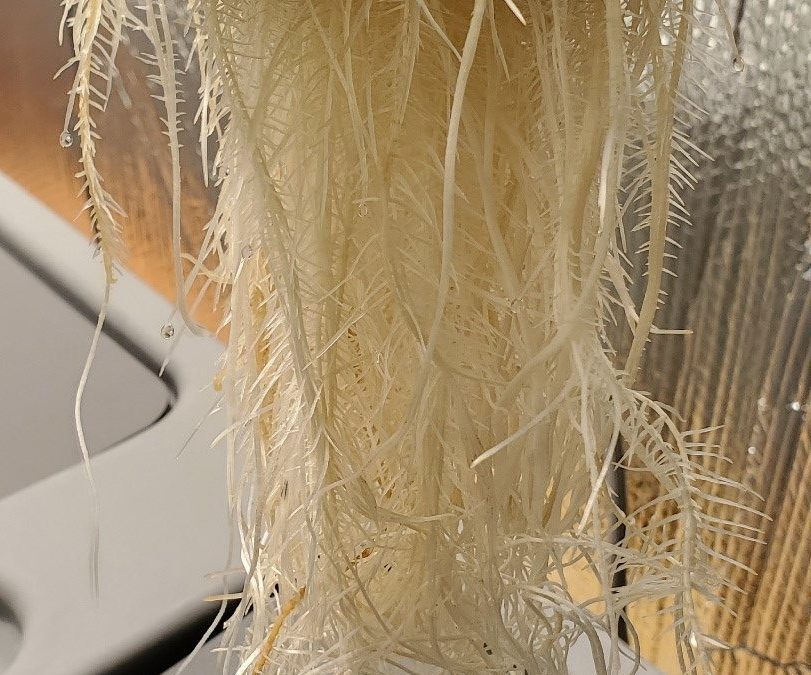 Different parts of the cannabis plant are useful for a variety of applications.  Stalks are a useful source of fiber, leaves contain powerful antioxidants, and flowers are well-known for cannabinoid production.  Cannabis roots are much less well-examined for potential usefulness.  “[A]lthough historically C. sativa roots were widely used as medicines to treat inflammatory conditions, joint pain, gout, and more, their therapeutic potential has been largely ignored in modern times”[1].

Studies in the 1970s and again in 2020 showed cannabis roots contain triterpenoids (common to many medicinal plants) and sterols (often used to lower cholesterol)[1].  In 2021, two universities in Italy set out to determine whether the beneficial compounds would be more prevalent in cannabis roots grown in aeroponic conditions.  Their hypothesis was that the aeroponic growing conditions would allow for greater root growth and easier harvesting of roots to extract beneficial compounds.

What is aeroponic cultivation?

Aeroponic cultivation is a growing method that uses no soil.  The plants’ roots grow in a large, open rooting zone periodically sprayed with nutrient mist.  This differs from hydroponics, which features flood and drain methods, and typically causes roots to be submerged much of the time.  The high pressure aeroponic system delivers nutrients to the plants in an ultra-fine mist.  This makes it easier for the plants to absorb the water and nutrients, leading to lower use of water and nutrients and faster, more vigorous plant growth.  For more on growing with aeroponics, visit Growing with Aeroponics | AerosourceH.

What did the researchers do?

Seeds of the Kompolti cannabis cultivar (commonly grown as a food source in Italy) were germinated in a damp paper under low-light and controlled temperature.  Once true leaves had developed, five plants were placed either in an aeroponic growing system or pots filled with 50% vermiculite/50% peat.  Plants in the aeroponic system were fed via nutrient solution sprayed at the roots for a total of 15 minutes per hour.  Soil plants were watered periodically with nutrient solution.  Aeroponic and soil plants were all placed in controlled environments where temperature, humidity, and light cycle were appropriate to maintain cannabis plants in a vegetative state[1].

What did they find?

“The growth of C. sativa var. Kompolti plants used in this study was significantly influenced by the two systems tested, i.e., conventional vs. aeroponic, with aeroponics promoting a significantly more rapid and intense growth of both the aerial parts and root systems”[1].  This means the aeroponic plants outperformed the soil plants in every measure.  They demonstrated 64x the root weight of soil plants, 39x the fresh weight of aerial parts (stems and leaves), nearly 4x the stalk diameter, and nearly 9x the mean leaves area versus the soil plants.  The aeroponic plants were also nearly double the height of the soil-grown plants, reaching 70 cm (27.6 in) after just 8 weeks of growth.

The content of triterpenoids and sterols was found to be higher by percentage of dry weight in the soil-grown roots.  However, because of the significantly higher production of root mass by aeroponic plants, the total amount of beneficial compounds per plant was higher in the aeroponic roots.  Additionally, the researchers observed that the recovery process for aeroponic roots was much easier than for soil plants.  “Indeed, AP roots are clean and free from the parasites and contaminants normally present in the soil”[1].  The combination of total compound production and lower projected cost of recovery therefore makes aeroponic plants better suited for cannabis root production for therapeutic compounds.

What does this mean for cultivators?

This study shows strong evidence that aeroponic cannabis cultivation is superior to soil growing.  Aeroponics produces larger, more vigorous plants than soil growing over the same time frame.  While the present study did not investigate differences in flowering cannabis plants in the two different grow systems, the increased production of roots, stalk, leaves, and height are all indications that the same differential would exist for flower yields.

The study also highlights the therapeutic potential of compounds found in cannabis roots, which are typically considered a byproduct of cultivation and discarded.  Beta-sitosterol in particular is present in cannabis roots at 100x the amount in other plants commonly used to source the compound[1].  While all growing methods will of course produce roots, “aeroponics allows perfectly clean root apparatuses to be obtained, which can be immediately harvested, extracted, lyophilized, micronized, or subjected to other processing methods”[1].